What is PKI technology?

A Key Pair is composed of 2 strings (keys) that are connected (mathematically) but is unfeasible from math point of view to derive one from another. In the RSA algorithm (most common and used asymmetric algorithm), these keys are called RSA Public Key and RSA Private Key.

The Private Key must be heavily protected this is why recommended to have it secured on a dedicated, special-purpose device. When used at application level (Certification Authority, Web Servers, Digital Signature Servers), these devices are called Hardware Security Modules. The devices used to protect the users’ Private Keys are either Smart Cards or PKI Tokens (“smart card” embedded in a device provisioned with USB interface).

When using the RSA Public Key in performing cryptographic operation with his/her counterparts/colleagues/ partners, the user must trust presented Public Key. In order to accomplish this, a digital certificate is used.

The principals/end-entities, as users, computers/systems, applications, etc., that want to participate in the deployed PKI will validate the chain up to the Root Certification Authority so they being sure that the presented digital certificates can be trusted.

Today’s companies have hard-times in protecting their data and keeping peace with compliance requirements. The amount of data is huge even for mid-size companies and the organization must ensure that the data is secure regardless its state, in-transit or at-rest. The data can be accessed in unauthorized way (loss of confidentiality), it can be modified inappropriately (loss of integrity), the users can be impersonated (loss of authenticity) or the systems may allow the users to deny their actions (repudiation).

Another area of concern is the management of the entire lifecycle of cryptographic keys. There should be appropriate measures to make sure that the keys are protected on each step: creation/generation, usage control, access control, expiration and change/rotation, distribution, storage, recovery, destruction/zeroization.

A Public Key Infrastructure is not a security control by itself, but it provides cryptographic support or a large array of other controls. Practically, there is almost no security control that hasn’t a bit of cryptography and/or digital certificates, starting from hashes on malware signatures or OS/ISO images, protection of management interfaces with TLS, secure tunneling, authentication processes, etc.

Despite the other controls that take advantage of cryptography, here are some scenarios where RSA Keys can be used to enhance the protection of the critical business assets:

Ensuring Confidentiality of the data at-rest and in-transit

Ensuring one of the factors for strong authentication

(Authentication by possession, by being in the possession of a digital certificate or a device that stores the private key)

(authentication of users to Active Directory by using Kerberos PKINIT)

Authentication of machines to the network

Authentication of users in order to establish VPN tunnels

The implementation of a Public Key Infrastructure and hardware protection in the Information Technology environment provides the foundation and the low-level elements for protecting your business. By using cryptography and digital certificates the business not only accomplishes compliance with international regulations/industrial standards (GDPR, PCI-DSS, SWIFT, ISO 27000, etc.) but enhances its security overnight.

A correctly implemented management of keys and digital certificates ensures business that:

The sensitive data remains protected regardless its state, being at-rest or in-transit

The communication peers are indeed those they claim to be

The counterparts cannot deny their participation in a specific operation; actually, the only way to ensure non-repudiation in business interactions and documents exchange is by means of digital signatures assuming that appropriate security measures were implemented. 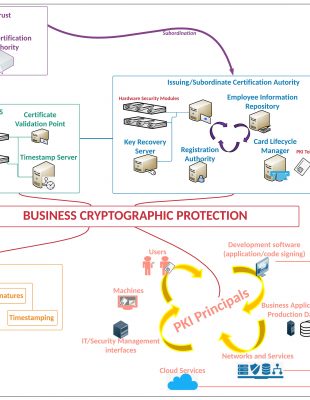 to find out what PKI solution is right for your needs.

Get started.
0shares
We use cookies to ensure that we give you the best experience on our website. If you continue to use this site we will assume that you are happy with it.OkNoPrivacy policy
Revoke cookies